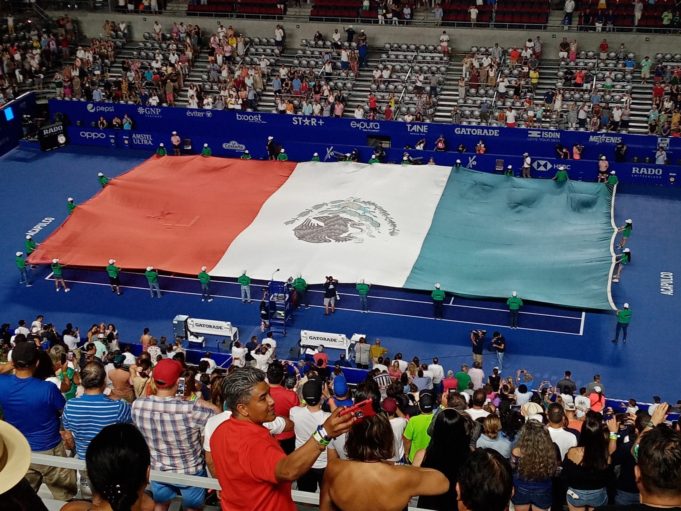 Monday night was the start of my fourth trip to the Mexican Open. In the
course of those visits, the courts have changed from clay to hard, and
this year, the tournament moved to a brand new stadium, also in the
Diamante area of Acapulco.

My seat was in the nosebleed section. The stadium has four elevators,
but only two of them were in operation, and, of course, they were the
ones on the opposite side of the stadium. There were some minor crowd
management issues (one of which I’ll address later), but things went
smoothly for a new event in a new facility.

There’s one more major difference. In past years, I have seen Maria
Sharapova and Bianca Andreescu play in this tournament.

My seat is in the Cinemex Terrace. It has movie theatre-style seats, and
food and beverages are included. Only problem is, the only beer they
have is Ultra, which is one of the tournament sponsors. Well, it was
cold, anyway.

The night’s first match was John Isner (US) vs. Fernando Verdasco
(Spain). Isner won the first set 7-5. He was up a break in the second
set, and appeared to be on his way to a win. When Verdasco was serving
at 3-5 and ad-out (match point), one of the ushers got the idea from
somewhere that there was a change-over, and the match had to be stopped
while a crowd of people came in and slowly went to their sears.
Fortunately for Verdasco, he won the point and stayed in the match.
Then, there was a medical timeout, and I thought that this would be a
good time to move to Court 1, and watch the only doubles match of the
evening.

It turned out that Verdasco won the second set in a tie-breaker, and
Isner won the third set with another tie-breaker; the match lasted over
three hours.

The doubles match was Feliciano Lopez (Spain) and Stefanos Tsitsipas
(Greece) vs. two New Zealanders, John-Patrick Smith and Luke Saville.
Smith seems to have been on the pro tour forever. I missed what was left
of the first set, won by Tsitsipas/Lopez in a 9-7 tie-breaker, because
all of the seats were occupied, so they weren’t letting people in until
some seats were vacated. Anyway, Tsitsipas has a fan base here, but even
without that, this was a very entertaining doubles match, and the crowd
really got into it. If I remember correctly, there were no service
breaks until Smith/Saville were serving at 4-5. They got into a 0-40
hole, which, in no-ad scoring, means four match points. Smith/Saville
canceled three of them, so the deciding point, won by Tsitsipas/Lopez,
was also set and match point.

So, when I returned to centre court, Stefan Kozlov (US) vs. Grigor
Dimitrov (Bulgaria) was still in the first set. In all my years of
watching tennis, I have never seen anything like Kozlov’s performance.
Kozlov, a “lucky loser” entry, won the first set in a 10-8 tiebreaker.
He got a service break in the second set, and was up 5-3 and getting
ready to serve for the match. Then, he got a really bad cramp. He was
incapable of walking for several minutes. When he starting serving the
next game, he was not only limping badly, his serves were barely
cracking 90 km./hour, and landing in the middle of the service court. If
this had been a boxing match, it would have been stopped. However,
Kozlov believed that if he stayed on the court, he could play his way
out of the cramp. He was right. To no one’s surprise, Dimitrov won the
next four games and the second set. However, Kozlov managed to hold
serve to start the third set, and continued to get better as the set
progressed. He continued to hold serve to 4-4, then broke serve and
served it out to win it. This matched lasted three hours and 21 minutes,
the longest match in tournament history.

And that wasn’t all. The final match of the evening was #2 seed
Alexander Zverev (Germany) vs. Jenson Brooksby (USA). (The players
entered the court at 1:25 AM.) Zverev showed the artistry that he is
known for, but, following the pattern of the rest of the evening,
Brooksby broke serve late in the set, and won it 6-3. And a *lot *of
jaws dropped. By this time, it was well past my bedtime, and I had to
leave. As I did so, I figured out that I shouldn’t say, “hasta manaña”
to my Guanajuato companions, because it was already “manaña”, so I said,
“hasta catorce horas” instead.

Well, that match went three sets, too. The second set was decided by a
12-10 tie-breaker, and Brooksby had two match points that he didn’t
cash. Zverev won the thirdset and the match 6-2. This one took three
hours and 20 minutes, and wasn’t over until 4:55 AM. That is a record
for the latest-ever finish.

There is a total absence of Canadians in this tournament, now unusual in
this day and age. Mexicans are few and far between. Santiago Gonzalez is
in the doubles draw. Miguel Angel Reyes-Varela, who plays tonight, is
also in the doubles draw, lost in the first round of qualifying, but got
in as a “lucky.