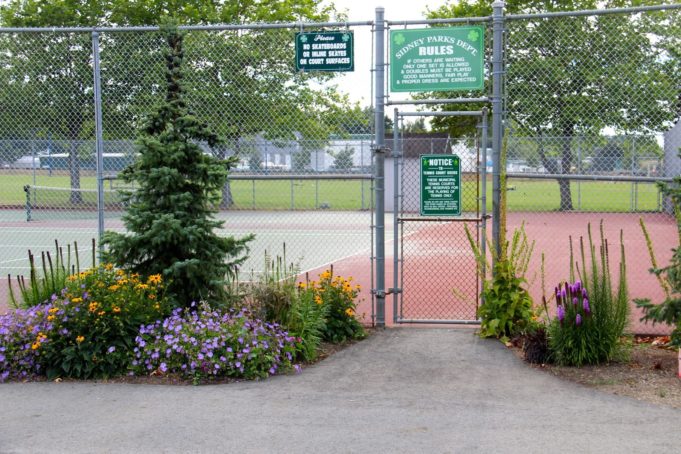 Sidney Vancouver Island BC, Iroquios Park Tennis Courts. Two hard courts in a lovely park setting surrounded by flowers and trees in picturesque Sidney BC.  The courts are public and free of charge.  They can be found within Iroquios Park in Sidney BC off Fifth Street and Ocean Avenue.

What To Do After Playing Tennis at Iroquios Park, Sidney-Discover Iroquois Park

Iroquois Park located at the corner of Fifth Street and Ocean Avenue was named after the S.S. Iroquois, a ship that between between Sidney, Nanaimo, and the Gulf Islands.  The Iroquois was used as both a freight and passenger vessel.  On the day of April 11, 1911 and within view of the Sidney Pier at the foot of Beacon Avenue, the SS Iroquois capsized and sank as a result of a shift of the freight it was carrying.  It is estimated that 21 people drowned in this incident; however, no one is absolutely sure as passenger manifests were not a requirement at the time.  The propeller from the Iroquois, which was salvaged in 1980, sits as a memorial near the centre of Iroquois Park.

Where To Stay Near Iroquois Park Tennis Courts-Sidney Waterfront Inn

Right on  Sidney’s 3.6 kilometres of stunning waterfront coastline, and very close to  Victoria International Airport, BC Ferries & Washington State Ferry terminals, The Sidney Waterfront Inn & Suites has a superb location. The hotel has 10 Deluxe rooms and 26 Standard rooms & Suites with popular Glass Beach right out front.  The hotel is located right Sidney’s main street that is lined with bookstores, coffee shops and restaurant

A historic Canadian mountain town with a tennis legacy